Bad Girl's Guide
This is a journal created by a woman for women. However, if you are a man in tune with your feminine side (or trying to get there), feel free to read on. It's mainly the stuff we talk about but that noone ever wrote down. It's all the stuff in all those self help books that we read, all the stuff that should be said but aren't. This is just a venting spiel, about the idiosyncrasies of dating and how to make it better. Name::Vixen

I'm 29 year old, fabulous and feisty female from Nigeria, who has found love, fun and happiness in life and has a plan of getting dozens of stamps on her passport. Welcome to my blog. Feel free to read archived posts...they are pretty interesting as well. I would also appreciate any comments you may have in whatever arena. The more the merrier!

Michelle Obama on Love & Relationships
Book Review: Screw Cupid
Why Do People Play Games?
Wow...just Wow!
Self Sabotage in a Relationship
Coupon for Boots
Sexual Double Standards
PANTENE is looking for you!
Loving Again after Heartbreak
Happy Birthday to the Bad Girls Guide!

One for Every Flavor

Sickle Cell Can Kiss My Ass!
Mysterious Meander
Confessions of a Platinum Pussy
Diary of a Nurse
True Shine Entertainment

This work is licensed under a Creative Commons License. This means that you cannot reproduce, print, publish or use any portion of this blog without express permission and consent from the author. In other words, don't steal my shit!

If I would prefer to take relationship advice from anyone in the world, it would definitely be the first lady Michelle Obama. Here’s her advice to young women on how to find the perfect man:


Cute’s good. But cute only lasts for so long, and then it’s, Who are you as a person? That’s the advice I would give to women: Don’t look at the bankbook or the title. Look at the heart. Look at the soul. Look at how the guy treats his mother and what he says about women. How he acts with children he doesn’t know. And, more important, how does he treat you? When you’re dating a man, you should always feel good. You should never feel less than. You should never doubt yourself. You shouldn’t be in a relationship with somebody who doesn’t make you completely happy and make you feel whole. And if you’re in that relationship and you’re dating, then my advice is, don’t get married. Get out of it and find that person that brings you complete and utter joy with who you are at the moment.

I second everything she said. 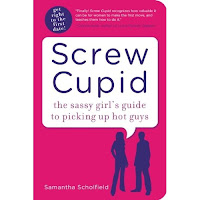 "Screw Cupid: the Sassy girl's guide to picking up hot guys" is a dating book.

by Samantha Scholfield
Publisher: The Experiment, September 2009
Paperback, 240 pages
website: http://screwcupidthebook.com/index.html
Screw Cupid is a dating manual for every woman ready to take her dating life into her own hands. Samantha Scholfield has many years of dating experience, and she developed and refined the techniques and strategies that she reveals here via hard-earned trial and error, consulting and collaborating intensively with hundreds of other women (and many men), and by marshalling the best of the extensive pickup advice that already circulates among men.
The result: perfectly calibrated guidance on initiating a conversation—anytime, anywhere—and getting right to a date, all without the guy knowing he’s being picked up.

Although not the most engrossing dating book I've read, it has an interesting premise. Instead of waiting around for the guy to ask you out, take the reins and do the asking. However, you have to do it in such a way that he doesn't realize that you are asking him out, thereby keeping the 'thrill of the chase' idea. Ummm, okay. Sounds way too complicated, but let's read further, shall we?

Although the author went into alot of her own dating foibles (which is what made the book funny), I really couldn't relate to it. The message sounds too much like the Game, as if the opposite sex cannot see through the subterfuge, guise and rules. I've asked guys out...many, many times. And the end result was a broken heart. Not from rejection on the spot (most of the guys were flattered), but from finding out down the road that he didn't value me as I needed to be valued. But that doesn't happen in Scholfield's pink world.

Tactics like "deliver a great opening line"---UM WTF? Examples are, "Why do guys grunt in the gym?" or "Why do guys think Angelina Jolie is hot?"...yeah okay...I used that on Norio and he answered back "Who is Angelina Jolie?" It did spark a conversation, but not one that turned into an amorous arena...it turned into a pop culture education session. If I had done this in a bar and gotten the same response, I probably would have blushed bright pink! The basic pointer I gleaned from this section is when you ask a guy an opening question, make sure he knows what/whom you are talking about.

Don't get me wrong, I'm all for a woman asking a guy to ask her out (see Surrendered Single review), or even talking to him first. But when has it ever worked out that the girl becomes the aggressor? Tactics like going to a bar, picking out guys and getting random phone numbers from someone you've talked to for less than 2 minutes...that's what boys do, and any woman that wants a REAL relationship quickly realizes that bar surfing doesn't work. On top of that, she encourages you to keep skimming the bar...over and over again. So even if one of the men that got your number had any interest, he would quickly lose interest once he realized that you were just a bar slut tease. Great idea there.

Whatever happened to clicking? Or mutual attraction? Or even *gasp* allowing the guy to approach you? Why are some women so desperate? And how can you even believe that this form of 'picking up a hot guy' doesn't smack of desperation?

Don't even get me on the 'hot guy' use in the book. A hot guy is described as any guy that you find attractive. Great. But what about a guy that is not so hot, but so right for you? We are actually being encouraged to skip over the not-so-hot guys, who might be Mr. Wonderful and head over to the 'hot guys'--who usually have a plethora of 'issues'. This superficial knee jerk reaction based on looks just reminds me of something that they do on Mars.

If you have a chance to check out this book, go for it. Maybe you will learn something, or it will spark a realization that dating is NOT a game. Maybe the tips on improving self confidence will help you out. Maybe the idea of taking the lead appeals to your personality. For me, I put it down halfway through the skimmed the rest.

This gets 2 out of 5 stars. Screw Cupid is like The Game for women. Perhaps it should have been written for the opposite gender. It's not my cup of tea, however, if you liked the Game, you might adore this book. Check it out on Amazon HERE.